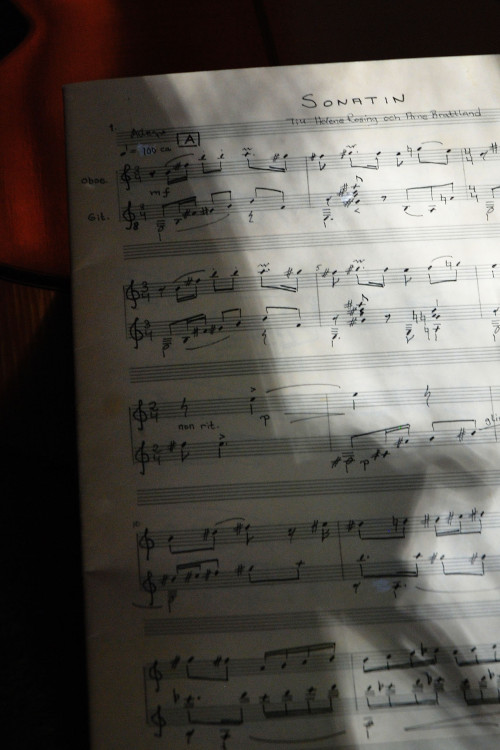 Staffan Isbäck (b. 1955) attended The Royal College of Music in Stockholm where he studied guitar under Peder Riis and Ulf G. Åhslund, chamber music under Rolf la Fleur, instrumentation under Svante Widén and later, counterpoint and composition under Hans Eklund. Guitar is central to many of his compositions and arrangements, often clothed in chamber musical form together with other instruments or vocals, but also as a solo instrument. Staffan’s compositions include choral works, chamber music, music for the stage and music for symphonic orchestra – amongst other things a double concerto for oboe, guitar and orchestra (first performed in 1989).

Renaissance lute music is of particular interest to Staffan and you will find many pieces for the lute (alto guitar) on this home page, complete with scored variations, as well as personal interpretations for guitar of Baroque music and “imaginary suites” – music where Isbäck acts co-composer and has completed unfinished fragments of melodies and composition sketches.

“My own music, a contemporary form of art music, strives towards a ”musician’s” touch – an accessible lightness and simplicity, with a distinct energy. I have often returned to older forms such as the rondo, the passacaglia, the sonata or other form variations. I tend to focus on melody, singability and simple coherence, but at the same time a seriousness and introversion. Having long experience of singing in choirs, I have also written a number of pieces for choir and arrangements for a capella choir or choir with orchestra, including work done in the context of a long collaboration with the Nicolai Chamber Choir and Christian Ljunggren who first performed my “Forellsånger” for choir and string quartet and most recently “Missa brevis”, performed in Storkyrkan (The Great Church or Church of St. Nicholas in Stockholm).”

Isbäck works as a music teacher at Danderyds Gymnasium where he teaches guitar, ensemble, music theory and the history of music. His works have been performed in the USA, England, Scotland, Germany, Estonia, Taiwan, Sweden, Norway, Finland and the former USSR. Fyra Trollformler was performed at the Chamber Music Festival in Båstad (Mikael Bellini/Sven Åberg). Sonatina for Oboe and Guitar was performed at the Chamber Music Festival in Örebro in 1995 by Helen Rosing and Arne Brattland. Sonatina for Clarinet and Guitar was dedicated to the group Duo dialog in 2010. The CD Equilibrium with music by Staffan Isbäck was chosen CD of the week on Swedish Radio’s P2 – Aurora in 2006.

As guitarist, Staffan Isbäck has accompanied several singers at Folkoperan in Stockholm – Bengt Gustavsson, Anna Söderbäck, Tua Åberg – and has taken part in tours and recordings with Stockholm’s Student Singers and the Nicolai Chamber Choir. At time of writing, 2014, Staffan is working on a recording with musicians from the Nordic Chamber Orchestra – music by Paganini, Beethoven, Wikmansson and Isbäck!